By now an international star, Manchester City sought Yaya’s signature for a fee of £24m. He was given the number 42 shirt to wear – the reverse of his idol Patrick Vieira’s number – and was once again reunited with older brother Kolo who had signed from Arsenal the previous season.

In his first year of English football, Yaya won the FA Cup, scoring the only goal in the final to lift City’s first major piece of silverware in 34 years. The club also secured Champions League qualification for the first time in modern football history.

A brilliant second season for Yaya included scoring 20 goals in 35 Premier League games – in his new attacking midfielder role – and a part in an historic last minute title victory which would later be described as the most thrilling final moment in Premier League history.

While Yaya was away making history at the Africa Cup of Nations in January 2015, City struggled, recording just one win in six games, prompting observers to comment on the vital role that he plays for the club.

On 2 July 2010 Yaya joined Manchester City for £24 million, joining elder brother Kolo, who moved to City in July 2009 from Arsenal.

A maiden Premier League goal came in a 2-0 win at Wigan Athletic in September, before his first Europa League goal in February against Aris, eventually gaining a second nomination for UEFA team of the year.

The midfielder was also man of the match, and scored the only goal, in a 1-0 FA Cup semi-final win over rivals Manchester United.

Yaya repeated that feat in the final, scoring the only goal at Wembley to defeat Stoke City 1-0 to give City a first major trophy in 35 years.

Yaya also passed ten league goals in all competitions for the first time in his career, notching six assists.

A first Champions League brace came in a 2-0 win at Villarreal in November and he later scored the opening goal as City claimed a 2-0 home win over Bayern Munich.

December saw Yaya crowned African Footballer of the Year for the first time, particularly impressive for a midfielder, as in the preceding 12 years the award had gone to strikers.

On his first game for City after returning from being a runner-up at the 2012 Africa Cup of Nations, Yaya was targeted by racist abuse at FA Porto. Using it as a chance to explain why he enjoys playing in England: “That’s why we like the Premier League, it never happens there.”

The abuse did not affect the on-field performance of Yaya, who assisted a crucial late winner for Sergio Aguero in the win against FC Porto, before notching another assist in the second leg that helped secure a 6-1 aggregate triumph for City.

In March of 2012 Yaya scored a late goal to rescue a 1-1 draw at Stoke City, an extra point that proved crucial in the title race, and City overturned an eight-point deficit to Manchester United across the last six matches.

Yaya was integral in a 1-0 home victory over United, before scoring a crucial brace in a 2-0 win against Newcastle in early May.

He then assisted the opening goal in a 3-2 win over Queens Park Rangers on the final day of the season to secure a first league title for City since 1968, with Yaya claiming six goals and six assists.

Yaya began with goals in his first three matches, before making his 100th City appearance in a 1-1 September draw with Arsenal.

He was also key in City’s Champions League quest, assisting an Edin Dzeko goal in their opening group match which ended in a 3-2 defeat at Real Madrid.

Yaya went on to gain a third consecutive nomination for UEFA Team of the Year and was crowned African Player of the Year for the second successive season in December 2012.

He was awarded man of the match for his performance during a 2-1 win over Chelsea in the FA Cup semi-final, before City eventually lost 1-0 to Wigan in the final.

Yaya contributed seven goals and five assists, despite being predominantly used in a withdrawn midfield role.

Yaya marked his 100th Premier League appearance with a goal from a free kick, as City dispatched Newcastle United 4-0 in their opening Premier League game.

This proved an omen for what followed as City eventually went on to win a second Premier League title, with Yaya more regularly offered greater freedom in an attacking-midfield role.

Yaya produced a man of the match performance in a 4-1 September win against title holders and local rivals Manchester United, scoring a goal along the way.

Come December, Yaya won his first BBC African Footballer of the Year award – a testament to his growing worldwide stature. He celebrated with a brace in a 3-2 win at West Bromwich Albion just two days later.

Yaya was also superb in the League Cup, notching a goal and an assist as City beat West Ham 6-0 in the first-leg of the semi-final.

In the final, City found themselves 1-0 down to Sunderland in the second-half, when Yaya scored a nonchalant right-footed strike from 30 yards to draw them level.

He then helped seal victory by carrying the ball from well within his own half to set up Jesús Navas, resulting in a 3-1 victory.

A first career hat-trick for Yaya came in March 2014 during a 5-0 thrashing of Fulham, followed shortly after by netting in a 3-0 derby win at Manchester United.

Yaya scored a landmark 20th Premier League goal of the season in May 2014, as Aston Villa were beaten 4-0. He emerged in a typical counter-attacking surge from his own half, outpacing several defenders.

BBC pundit and ex-striker Alan Shearer said of the goal: “Yaya’s fourth goal was like watching a 15-year-old against under-12s. You just can’t catch him.”

Yaya became just the second midfielder to reach twenty goals in an individual Premier League season and one of six on the PFA Player of the Year shortlist.

In April, he made the PFA Team of the Year for the second time in his career, also finishing third in the 2014 Football Writers’ Association Player of the Year award.

Yaya managed a remarkable 20 goals from 35 league matches and 24 from 48 in all competitions, achieving nine Premier League assists as City regained their league title.

Yaya largely returned to a more defensive role but still managed a productive goal return and led Ivory Coast to win the Africa Cup of Nations.

A 200th appearance for Manchester City came for Yaya when playing away at West Ham in October 2014.

Yaya notched a crucial equaliser in the Champions League group stage against CSKA Moscow in November, commencing an impressive run of seven goals in ten games across all competitions during the rest of the year.

One of these goals came in a 3-0 home win over Crystal Palace the following month, marking a 150th Premier League appearance for Yaya.

January 2015 saw Yaya named 2014 African Footballer of the Year for the fourth successive time, before captaining Ivory Coast to victory in the 2015 Africa Cup of Nations.

Yaya then faced his brother Kolo in a competitive match for the first time in March against Liverpool.

A brace in a 4-2 win at Swansea took Yaya into double figures for the Premier League season.

Five of his Premier League goals came from outside the box, the second best record of anyone that season, despite playing just 27 league games due to his AFCON extended leave.

A 400th career appearance in club football came against Spurs in September, featuring another assist.

December saw Yaya win the BBC African Footballer of the Year award, which is voted for by fans, becoming just the third person to win it twice.

Yaya notched a Champions League goal against Dynamo Kiev, ensuring Manchester City could take a reassuring 3-1 aggregate lead back to the Etihad in the last 16.

Yaya and his teammates found themselves 2-0 up at the break but the Ukrainian outfit came out stronger in the second half, managing to pull a goal back. Yaya, however, executed a brilliant finish and the Ivorian’s late curler put City firmly back in control, as they saw out the rest of the match.

The ensuing home leg finished goalless, sending City through to the quarter-final, where they pulled off a momentous 3-2 aggregate win over French giants, Paris Saint-Germain, to earn a place in the penultimate round of Europe’s most coveted cup for the first time in their history.

Yaya and his teammates went on to face 10-time Champions League winners, Real Madrid, eventually being knocked out by a single goal.

Yaya secured the Capital One Cup for the Citizens by scoring the decisive penalty in the February final against Liverpool.

His unflappable approach to the spot meant Reds’ keeper Simon Mignolet was unable to make contact with the ball and it evaded his outstretched hand, slotting into the bottom corner and cementing a 3-1 shootout win.

The experienced Ivorian added this second Capital One Cup win of his career, with the first coming in 2014 where he also scored in the final, a 3-1 triumph over Sunderland.

Making his return to the first team on the 19th November against Crystal Palace at Selhurst Park, Yaya scored a brace to secure a 2-1 victory for his side. Such is the high regard Yaya is held by his team mates, that they gave him a standing ovation when he entered the dressing room after the game. The Ivorian had not been part of the squad until this game because of a well documented issue between the Manchester City manager, Pep Guardiola, and his agent.

Yaya’s great form continued and he was voted the Manchester City Player of the Month for December.

Despite the club not winning any silverware, Yaya enjoyed a great season – playing mainly in a deeper midfield role. Pep Guardiola was so impressed that he offered Yaya a contract extension, keeping the 4 time African player of the Year at the club for another year.

Despite featuring in all of Manchester City’s preseason games ahead of the 2017-18 season, Yaya did not start the opening game of the season against Brighton & Hove Albion and was mainly used as a substitute for the campaign. However, the Ivorian played a pivotal role in the dressing room, using his extensive experience to help Pep Guardiola’s young side.

The four-time African footballer of the year said: “As one of the older guys at this club, you have to help things carry on going. I remember when Kun [Aguero] was in great form and Gabriel Jesus was not playing and not happy as he was not being picked, I took him to one side and gave him a pat on the back. The manager doesn’t know I’m doing that.

“That’s why you see the guys sing my name and come to slap me. They don’t mean it bad, or because they love the song, they just give me the respect I have given to them.”

Guardiola played Yaya in every round of City’s League Cup run until the second leg of the semi final versus Bristol City and final against Arsenal at Wembley.

Manchester City’s final game of the season – against Brighton & Hove Albion – was dedicated to Yaya as a goodbye and thank you for eight years service at the club, where they won three Premier League titles.

Yaya was named as captain for the game and was given a standing ovation as he left the field. The club invited his brother Kolo to present a framed shirt and life time season ticket to the City legend.

In a move never made before the City chairman, Khaldoon Al Mubarak, named a training pitch after Yaya which was marked with a special unveiling. 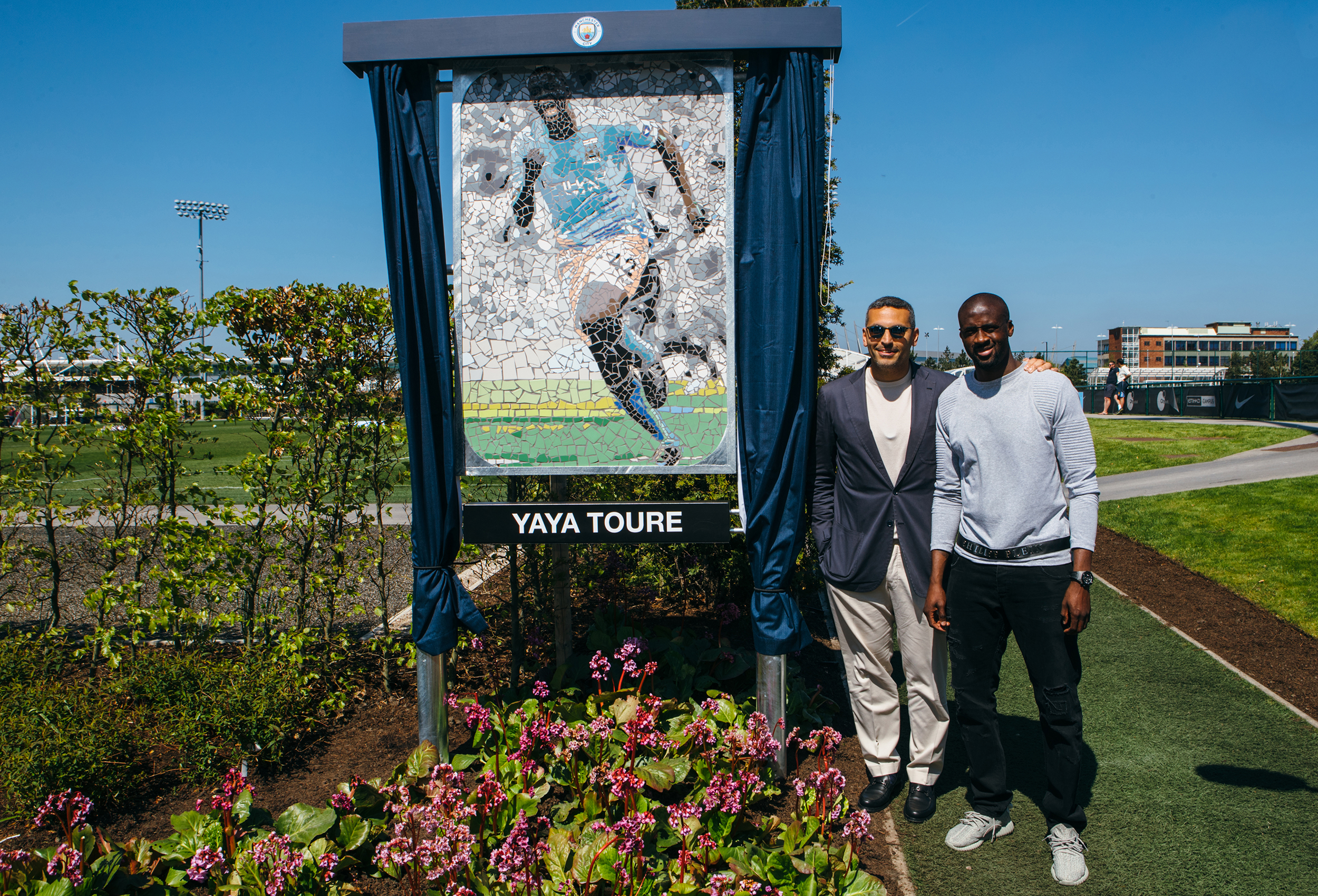